Video frame interpolation aims to increase the frame rate of videos, by synthesizing non-existent intermediate frames between original successive frames. With recent advances in optical flow, motion-based interpolation has developed into a promising framework. Estimating the bi-directional motions between input frames is a crucial step for most motion-based interpolation methods. Existing methods typically employ an off-the-self optical flow model or a U-Net for bi-directional motions, which may suffer from large model size or limited capacity in handling various challenging motion cases.

This blog presents a novel model to simultaneously estimate the bi-directional motions between input frames. Our motion estimator is extremely lightweight (15x smaller than PWC-Net [1]), yet enables reliable handling of large and complex motion cases (see Figure 1). Based on estimated bi-directional motions, we employ a synthesis network to fuse forward-warped representations and predict the intermediate frame. Our method achieves excellent performance on a broad range of frame interpolation benchmarks.

Many of existing methods employ an off-the-shelf optical flow model (e.g., PWC-Net [1]) for bi-directional motions, which however suffer from large model size, need to run the model twice, and can hardly handle extreme large motion beyond the training data. Recently, a BiOF-I module is proposed for simultaneous bi-directional motion estimation [2]. It is based on a flexible pyramid recurrent structure, which enables customizable pyramid levels in testing to handle large motions. However, U-Net is over-simplified for optical flow, due to the lack of correlation volume, which is a vital ingredient in modern optical flow models. We present a solution that overcomes the limitations of both PWC-Net [1] and BiOF-I [2].

Figure 2.   Overview of our frame interpolation pipeline. (a) We repeatedly apply a novel recurrent unit across image pyramids to refine estimated bi-directional motions between input frames. (b) Based on estimated bi-directional motions, we forward-warp input frames and their context features, and employ synthesis network to predict the intermediate frame.

There are three key components involved in our recurrent unit: middle-oriented forward-warping, extremely lightweight feature encoder, and correlation based bi-directional motion estimation. In particular, due to reduced motion magnitude, our middle-oriented forward-warping has the chance to reduce the impacts of possible artifacts in warped images in case of large motion. Furthermore, warping both input frames to a hidden frame allows us to construct a single correlation volume for simultaneous bi-directional motion estimation.

We name our frame interpolation method as EBME -- Enhanced Bi-directional Motion Estimation for frame interpolation. We construct three versions of EBME, with almost the same model size but increased computational cost: (1) EBME that combines our bi-directional motion estimator with the base version of synthesis network; (2) EBME-H that combines our motion estimator with the high-resolution version of synthesis network; (3) EBME-H∗ that uses the test-time augmentation with EBME-H.

Figure 3.   Visual comparisons on two examples from the “extreme” subset of SNU-FILM. The first two rows show the synthesis results for detailed textures, while the last two rows demonstrate the results with complex and large motion.

We compare with many state-of-the-art methods on UCF101, Vimeo90K and SNU-FILM, including DAIN [7], CAIN [5], SoftSplat [8], AdaCoF [9], BMBC [10], ABME [11], XVFI [2], and ECM [12]. As shown in Table 1, Our EBME-H∗ achieves best performance on these benchmarks. Our EBME also outperforms many state-of-the-art models including DAIN, CAIN, AdaCoF, BMBC, XVFI, and ECM. It is worth noting that our models are about 4.5x smaller than ABME, and run much faster. Figure 3 gives two examples from the “extreme” subset from SNU-FILM. Our methods produce better interpolation results than ABME for some detailed textures (first two rows), and give promising results for large motion cases (last two rows), much better than CAIN and AdaCoF, and sightly better than ABME.

We also report the 8x interpolation results on 4K1000FPS [2]. As shown in Table 2, our method achieves the best performance by SSIM, but slight inferior results to ABME [11] and XVFI [2] by PSNR. Note that XVFI is trained on 4K high-resolution data, while other models are trained on low-resolution data. Our method supports arbitrary-time frame interpolation, and can fully re-use estimated bi-directional motions when interpolating multiple intermediate frames at different time positions. By contrast, while XVFI can reuse the bi-directional motions, it must refine the approximated intermediate flow with an extra network at each time position. Figure 4 gives two interpolation examples. Our methods give better performance for moving small objects. The U-Net based pyramid motion estimator in XVFI might have difficulty in capturing the motion of extreme small objects. 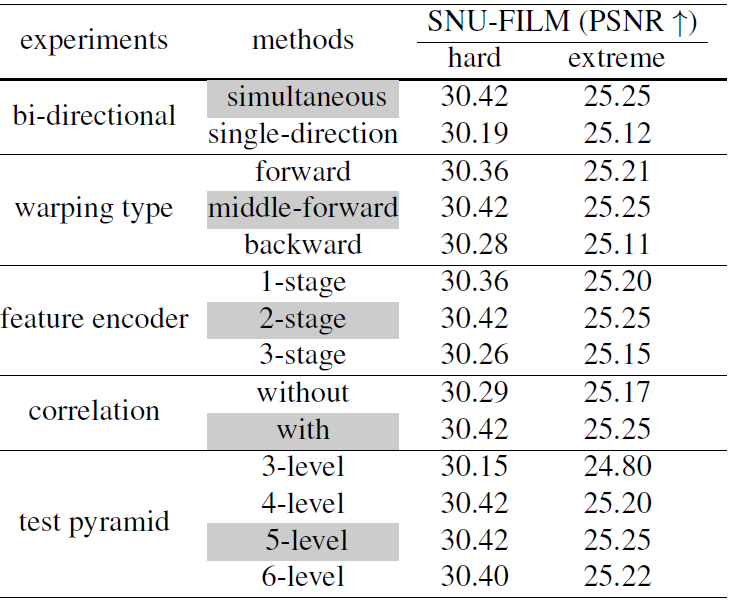 Table 3.   Impacts of the design choices of our motion estimator for frame interpolation.

Figure 5.  (a) Our middle-oriented forward-warping can reduce possible artifacts in warped images in case of large motion. (b) Correlation is essential for estimating challenging motions, which however is overlooked by many frame interpolation methods.

Figure 5 gives visual evidences about the effectiveness of our warping method and correlation-based motion estimation. Due to reduced motion magnitude, our middle-oriented forward-warping can reduce the impacts of possible artifacts in warped images in case of large motion. Correlation volume enhances the ability of our estimator in estimating complex nonlinear motions. The significant of correlation volume is largely overlook by many of existing motion-based frame interpolation methods.

Link to the Paper