TL;DR: We propose channel coding as a novel benchmark to study several aspects of meta-learning, including the impact of task distribution breadth and shift on meta-learner performance, which can be controlled in the coding problem.

Challenges in Studying of Meta-Learning

Meta-learning, or learning-to-learn, has recently grown into a thriving research area in which rapid progress is being made [1, 2, 3], thanks to its proven ability to learn new tasks in a data-efficient manner. While performance has improved steadily, particularly on standard image recognition benchmarks, several fundamental outstanding challenges have been identified [3]. Notably, state-of-the-art meta-learners have been shown to suffer in realistic settings [4, 5], when the task distribution is broad and multi-modal; and when there is distribution shift between the (meta)training and (meta)testing tasks. These conditions are relevant in most real-world applications. For example, robots should generalize across the range of manipulation tasks of interest to humans [4], and image recognition systems should cover a realistically wide range of image types [5]. 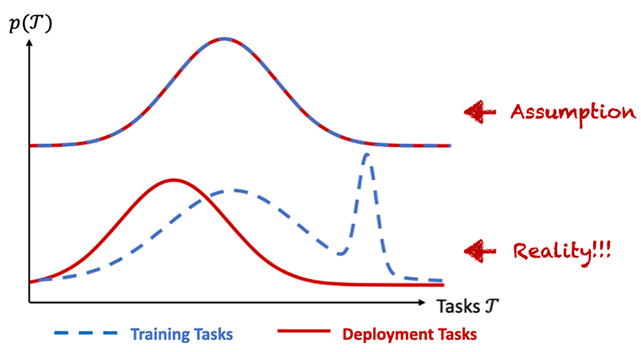 However, systematic study of these issues is hampered because conventional benchmarks do not provide a way to quantitatively measure or control the complexity or similarity of task distributions: Does an image recognition benchmark covering birds and air-planes provide a more or less complex task distribution to meta-learn than one covering flowers and vehicles? Is there greater task-shift if a robot trained to pick up objects must adapt to opening a drawer or throwing a ball?

In a recent paper [6], we contribute to the future study of these issues by introducing a channel coding meta-learning benchmark termed MetaCC, which enables finer control and measurement of task-distribution complexity and shift.

Channel coding is a classic problem in communications theory. It is about how to encode/decode data to be transmitted over a capacity limited noisy channel so as to maximize the fidelity of the received transmission. While there is extensive theory on optimal codes for analytically tractable (e.g., Gaussian) channels, recent work has shown that codecs obtained by deep learning provide clearly superior performance on more complex challenging channels [7].

Existing best neural channel coding is achieved by training codecs tuned to the noise properties of a given channel. Thus, a highly practical meta-learning problem arises: Meta-learning a channel code learner on a distribution of training channels, which can rapidly adapt to the characteristics of a newly encountered channel. For example, the role of meta-learning is now to enable the codec of a user's wireless mobile device to rapidly adapt for best reception as she traverses different environments or switches on/off other sources of interference.

Figure 2.  An illustration of the channel coding problem.

We introduce channel coding problems as tasks to study the performance of meta-learners, defining the MetaCC benchmark to complement existing ones [4, 5]. Our benchmark spans five channel families, including a real-world measurement of channels based on Software Defined Radio (SDR). We show how the channel coding problem uniquely leads to natural model-agnostic ways to measure the breadth of a task distribution, as well as the shift between two task distributions (Fig. 1) – quantities that are not straightforward to measure in vision benchmarks.

Building on these metrics, we use MetaCC to answer the following questions, among others:

Q1: How vulnerable are existing meta-learners to under-fitting when trained on complex task distributions?

Q3: How much can meta-learning benefit in terms of transmission error-rate on a real radio channel?

A typical channel coding system consists of an encoder and a decoder, as illustrated in Fig. 2. In this example a rate 1/2 channel encoder maps K message bits

to a length-2K transmitted signal

. In a more general setting a rate 1⁄r encoder maps

, and channel outputs a noisy signal

The decoder in turn takes the noisy signal as input and estimates the original message, i.e.

The reliability of an encoder/decoder pair is measured by the probability of error, such as Bit Error Rate (BER) defined as

We treat the decoding problem as a K-dimensional binary classification task for each of the ground-truth message bits bk.

can vary over time, and is unknown to the decoder. To help the decoder estimate the channel, pilot signals that are known messages bknown are sent to the decoder before the transmission begins, so that the decoder can extract channel information from y and bknown.

When modeling the decoder as a neural network instead of an analytical algorithm, one trains the decoder for a specific channel using pairs (y,bknown) with pilot signals as ground-truths and their corresponding noisy received values as inputs. The optimization goal is to minimize a loss

, which is typically in form of binary cross-entropy, with respect to decoder

change due to e.g. weather or moving users, which always happen in realistic communications, the neural decoder fθ should adapt to evolving channel. Meta-learning is therefore a promising tool to enable rapid decoder adaptation with few pilot codes, as confirmed by early evidence [8]. Conversely, channel coding provides a lightweight benchmark for contemporary meta-learners, allowing control of the task complexity and distribution-shift, thanks to the mathematical representability and tractability of channel models.

We consider five families of channel models including both synthetic channels (AWGN, Bursty, Memory noise, and Multipath interference channel) and real-world channel with data recorded from a software-defined radio testbed. Each family is analogous to a dataset in common multi-dataset vision benchmarks [5].

We quantify the train-test task shift distance (Definition 1) and diversity of each task (Definition 2), based on information theoretic measures. In the proposed coding benchmark, as we demonstrate this in the full paper, one can control these scores by choosing an appropriate set of channel models, which allows us to evaluate the variability of meta-learning with the task distribution breadth and shift as illustrated in Fig. 1.

Definition 1: Train-Test Task-Shift measures have previously been an open problem in meta-learning. However, this becomes feasible to define for the channel coding problem. We quantify the distance between a test distribution pa (T) and a training distribution pb(T) using the Kullback–Leibler divergence (KLD) a.k.a. the relative entropy. Given pa (ya|c)and pb (yb |c) denote the channels associated with Ta and Tb respectively. The KLD-based shift distance score is defined as:

Definition 2: Diversity Score of a task distribution p(T) is defined as mutual information between the channel parameter ω and the received signal y:

Where ω denotes the channel parameter a.k.a latent variable for the task distribution, i.e.,

We will see that this metric will quantify amenability to meta-learning. Intuitively, decoding can benefit more from meta-learning when the channel distribution p(y|c,ω) differs more across tasks (channel parameterω). I.e., knowing the task conveys more information abouty.

The full paper covers the description of extensive evaluation we carried out, which covers 10+ meta-learning algorithms including both gradient-based and prototypical feed-forward meta-learners, under a range of channel distribution complexity & train-test shift scenarios. Here we focus on the results highlighting the answers to Q(1-3) introduced above.

Q2 & Q3: Fig.4 indicates the performance margin of adaptive neural decoders based on meta-learning tends to improve with distribution-shift (left), and meta-learning can achieve up to 58% and 30% reduction in error rate compared to the Empirical Risk Minimisation (ERM) and classic Viterbi respectively (right).

Figure 4.  Left: Performance margin of adaptive neural decoders based on meta-learning tends to improve with distribution-shift. Right: Meta-learner achieves up to 58% and 30% reduction in error rate compared to the ERM and Viterbi respectively.

Why To Use MetaCC Benchmark

▷  It provides a systematic framework to evaluate future meta-learner performance w.r.t under-fitting complex task distributions and robustness to train-test task distribution shift that is ubiquitous in real use cases such as sim-to-real

▷  MetaCC is independently elastic in every dimension e.g., number of tasks, instances or categories; dimension of inputs; difficulty of tasks, width of task distributions and train-test distribution shift; making it suitable for the full spectrum of research from fast prototyping to investigating the peak scalability of meta-learners

We present a channel coding based benchmark for meta-learning that is elastic in terms of number of tasks, categories, difficulty of tasks, width of task distributions and train-test distribution shift. We use this to demonstrate the ability to improve neural channel decoding by fast adaptation, and to provide a tool for the study of meta-learning through fast prototyping and ability to investigate scalability, generalization and meta over/under-fitting.

Meta-Learning in Neural Networks On September 2, 2021