As operators around the world roll out 5G technology, a fundamental change to network architectures has taken place: networks of today are more resilient, flexible and extensible. More and more industry verticals are being integrated with the 5G networks, and as this happens, there is one issue less to worry about – the fear of monolithic network and network-wide downtime!

Gone are the days when every new service introduced in the network had to be planned months, if not years, ahead. Several rounds of validations were done in mock environment to ensure existing services won't be impacted. Millions were invested in hot-standby systems yet operators still shivered at the prospect of software misbehavior. 5G networks, on the other hand, are more 'service-based', where each service can be deployed on a sub-network isolated from others. Introducing a new service doesn't require and won't cause a downtime on the entire network.

Network slicing is essentially the ability to divide your network into individual compartments, each curated to provide these specialized services. There could be one slice for providing service to a logistics enterprise, which wants to use the operator's network to track its fleet of trucks at any point of time, while another slice for retail customers interested to use operator's network for voice and data. Apart from providing different levels of security, e.g., due to enterprises not wanting their data to pass through same “compartment” as retail customers for want of data-confidentiality, each compartment could also provide a different level of quality of service (QoS) and/or availability. Moreover, each such compartment can be commissioned or decommissioned, augmented or decreased in size independent of other compartments present in the same network.

Samsung has been actively participating in standardizing network slicing work in 3GPP since initial phases of 5G. In particular, essential system enhancements that improve slice availability and experiences for users have been led by Samsung. Also, Samsung is currently leading the standardization work which aims to realize the automated management of network slices.

Evolultion of Slicing in 3GPP Standards

APN (Access Point Name) was probably earliest form of network slicing in a mobile network, which allowed operators to divide their networks according to service requirements. Each distinct service could be identified by a separate APN-name, and users would connect to their compartment (APN) depending on the service they wanted to consume. This form of slicing, however, required common network functions (NFs)’ resources shared among multiple APNs, and thus services were not "fully" isolated. 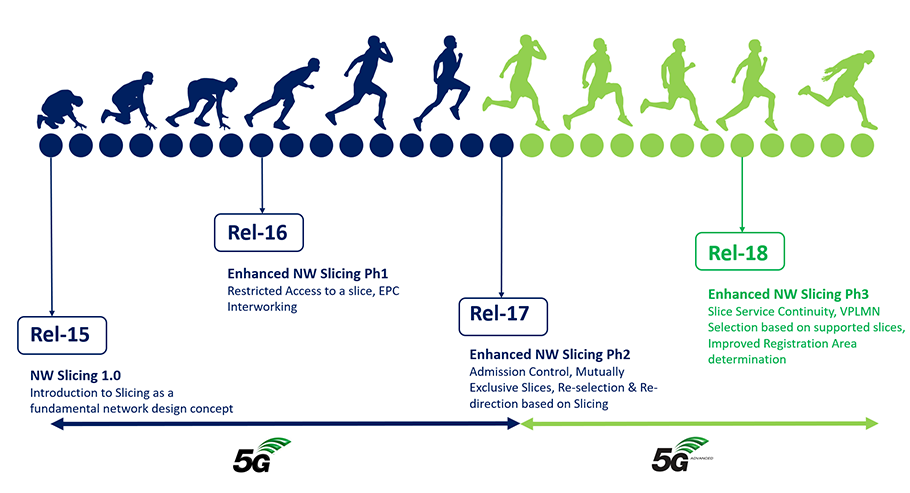 The 5G network architecture of 3GPP Release-15 was a great leap forward, where network slicing became fundamental to network design. Every NF is identified by a slice identifier it belongs to; each base station is configured with the slices it serves and every user’s subscription contains information on slices it is allowed to access. The user can subscribe to multiple services, which may be provided on isolated slices within the network. The user equipment (UE) is additionally configured with the information that helps select the right slice for its application traffic. In addition, standardized network slice life-cycle management procedures were developed using service-based architecture, leading to a near-perfect, end-to-end network-slicing architecture.

In Releases-16 and 17, 3GPP continued to address a number of practical deployment gaps based on feedback from the industry. Restricted (and limited) access to a slice, steering users to a cell supporting slices-of-interest have been some of such focus areas. Further enhancements are being considering in Release-18 (5G Advanced), including service continuity and improved network slice management.

Each network slice is identified by an S-NSSAI containing a Slice Service Type (SST) that identifies the service for which a network slice is suitable. A network operator can use either standardized SST values (i.e., 1 for enhanced mobile broadband, 2 for ultra-reliable low latency communications, 3 for massive IoT, 4 for V2X, 5 for High performance machine type communications) or non-standardized SST values that can be locally defined.

Figure 2.  An example of network slice deployments where URLLC slice and eMBB slice are deployed

The UE is configured with rules (USRP - UE Route Selection Policy) that allow it to select an S-NSSAI based on the application it wishes to use (depending on, e.g., QoS requirements of the application), as illustrated in the example. The UE has two PDU sessions, where one is established via S-NSSAI#1 (URLLC slice) towards the Data Network Name (DNN) of internet while the other is established via S-NSSAI#2 (eMBB slice) towards the same DNN. When a UE needs to send traffic of App1, the UE finds the matching traffic descriptor in the URSP rule and selects the PDU session according to the corresponding route selection descriptor (e.g., PDU session of S-NSSAI#1 and DNN of internet).

Network slice-specific authentication and authorization (NSSAA) is a feature that enables a 3rd party application provider who contracted for a specific slice to authorize and authenticate UEs for the network slice. In order to have an S-NSSAI subject to NSSAA to be allowed, a UE needs grant from 3rd party server based on a pre-provisioned credential for the S-NSSAI.

Slice-aware Radio Access Network (RAN), where an operator can manage radio spectrum per network slice, is an important standard feature led by Samsung. For example, an operator could use eMBB service on higher frequency band and IoT on a low frequency band, respectively. 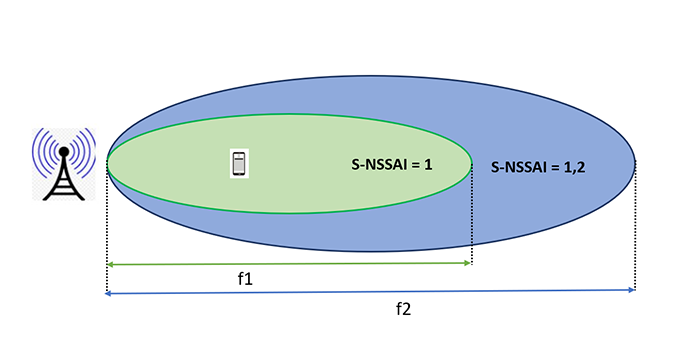 Standardizing the management aspect of network slicing is crucial for the large scale adoption of the slicing feature. Use case such as NaaS (Network-as-a-service) enables consumers (internal or external) to request for a slice allocation at run-time. This requires exposing a standardized management interface for consumers to use. The same interface also enables consumers to monitor the performance of the slices assigned to them and request for a particular SLA (Service Level Agreement) to be maintained. 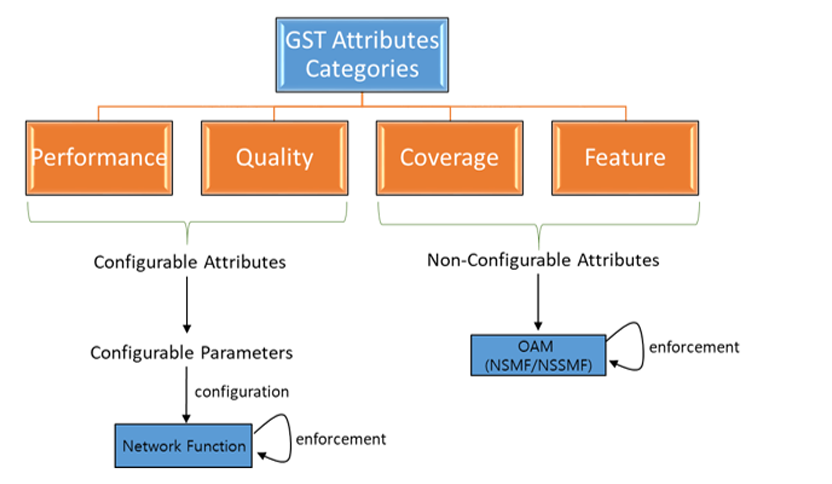 Performance Assurance (PA) defines the measurements and the collection mechanisms for the purpose of network monitoring and management. Two alternatives have been defined for the PA by 3GPP: a dedicated operation-based approach where dedicated operations have been defined to request/receive/collect the required performance measurements, and a Network Resource Model (NRM)-based approach where NRM control fragments are defined to enable the functionality of requesting/receiving/collecting the required performance measurements. 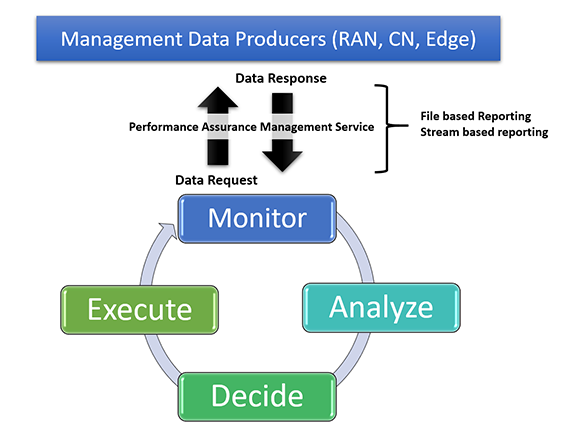 Further, 3GPP defines mechanisms to assure the SLA requirements for network slices. This is enabled by the ACCL (Assurance Closed Control Loop) mechanism. An ACCL contains four steps: Monitor, Analyse, Decide and Execute. The slice performance is monitored by collecting the various management data including performance measurements, alarms, trace and QoE (Quality of Experience) data. The data is then analysed using AI/ML methodologies to check if the slice SLA is fulfilled or will be fulfilled in future. The root cause analysis is performed to understand the cause of the SLA deterioration, if any. Once the root cause in ascertained the corrective actions are decided and executed to keep up the slice SLA guarantee. Strict SLS assurance for a service can be provided using ACCL for a high-valued vertical customer present in a particular location.

With the introduction of Network Slicing in 5G, it is now possible for operators to leverage a fully-flexible, service-oriented end-to-end network architecture for industry verticals. With the recently initiated work on 5G Advanced, 3GPP continues to exploit this concept further to improve the ease of deployment and fill gaps reported by industry. Some of the focus areas include: allowing selection of roaming partner (by the UE) based on slices supported, service continuity when existing slice cannot meet the agreed SLAs, support of temporary slices, e.g., during a stadium event, etc. Additionally, it is expected that the network slice management would become more robust and automated requiring no human intervention (zero-touch network slice management/automation). The standardized mechanism for performance data collection would enhance to the extent of collecting data for a particular location, domain, traffic-type, etc. and then taking automated decision to meet the SLAs.

Samsung believes network slicing to be an essential feature for 5G and 5G Advanced deployments, which enables customization of networks for heterogeneous needs of the emerging industry verticals, and the end consumers.

Acknowledgements: The authors would like to acknowledge the contributions from Sangsoo Jeong, Suresh Chitturi and the entire 3GPP System Standards team at Samsung Research.

5G Edge Computing Opens the Era of the Next Version of the Internet On January 19, 2021

A Journey with Stars On June 28, 2022
PREV
Enabling mmWave Wireless Communications for High-Speed Railway
NEXT
MetaCC: A Channel Coding Benchmark for Meta-Learning