It has been almost 2 to 3 decades since technologists and researchers in the area of computer vision and graphics have tried their hand at creating virtual simulations of objects and world around us. Head mounted devices (HMDs) have been designed and used to provide view of such Virtual Reality (VR) experience to users. Also intense research in recent decade with respect to augmenting the real world with virtual objects has led to creation of Augmented Reality (AR) and Mixed Reality (MR) experiences.
These can be represented in a continuum as below:

The ends of the above continuum in Fig. 1, actually refer to the extreme representation of “space” versus “no-space” which can span across “time” versus “no-time”. Hence, a better interpretation of the continuum in “Space versus Time” 2D space can be as in Fig. 2 below which amounts to Reality and Virtuality being contained in specific quadrants of the 2D time-space depiction. The origin of such a 2D real - virtual space would refer to synergy of Augmented Reality and Augmented Virtuality (AV) as in the Fig. 2 below. 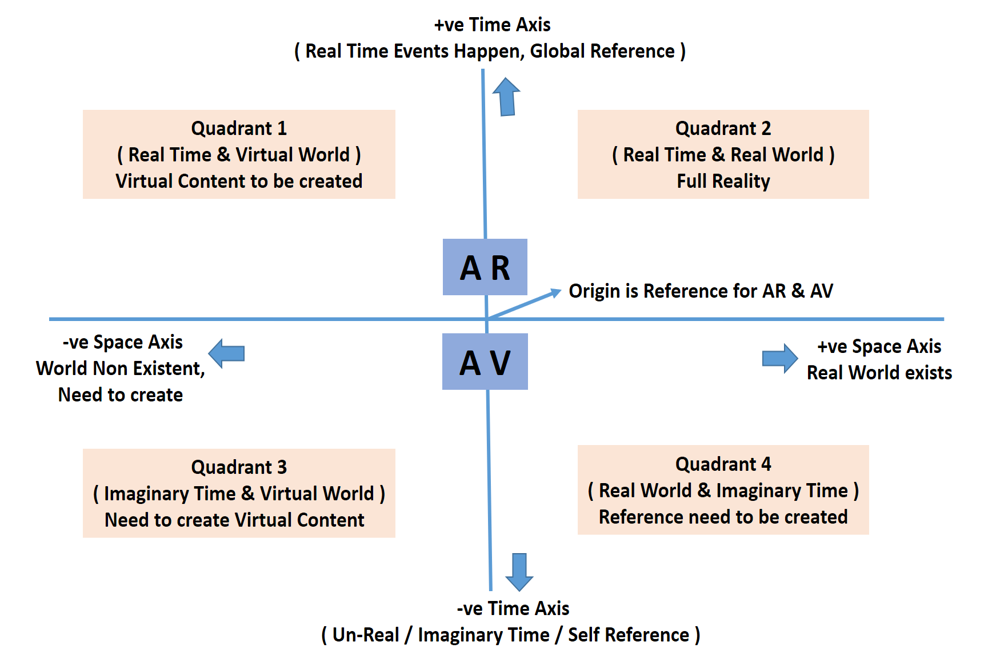 Any experience created as a VR / AR / MR / AV would finally amount to creation of Physical Virtuality and Alternative Reality. The “METAVERSE” is one such mega experience encompassing these.

The Definition of Metaverse

Metaverse in simple can be defined as an evolution of internet encompassing the physical and virtual worlds. An interesting definition from Gartner mentions Metaverse as a "collective virtual shared space created by the convergence of virtually enhanced physical and digital reality".

Metaverse is expected to be a persistent immersive boundless social experience which is decentralised with its own economic system parallel to the real world. The immersion due to it being a realistic sensory experience, the persistence due to the always active nature of it, boundless due to the endless possibilities offered by digital creations and related manifestations.

The Foundations of Metaverse

Metaverse includes elements from physical and virtual worlds as mentioned above, wherein digital entities are placed in real world. In essence it amounts to MR which is an outcome of internet being enabled to include digital 3D virtual spaces wherein a user will be translocated to realistic 3D virtual spaces, where he/she can socialize, learn, collaborate and play in unimaginable ways beyond the current gaming experiences and beyond currently possible social media interactions.

The foundations of Metaverse can thus be visualised as being the following 4 pillars (see Fig. 3 below)

The virtual spaces amount to the creation of realistic environments similar to the real-world in many ways but can be unique in its own way. Templates of 3D virtual spaces need to be created to enable such instances for users. The Metaverse in essence would require all parallels of indoor and outdoor versions of real-spaces such as those related office spaces, school / training spaces, event / gathering spaces, family / friends meeting spaces, performance spaces, sports spaces, shopping spaces, travel spaces, entertainment spaces etc… Immense potential exists for defining such spaces beyond what can be imagined to provide user an ethereal experience.

b) Virtual Assets or Digital Twins

The virtual spaces thus created would not be complete and representative without the existence of virtual assets or digital twins or avatars of all real-life entities. This entails the creation of digital human avatars which can be clothed or morphed beyond imagination in the virtual world. Human avatars as Virtual Influencers have already taken the internet by storm. It also requires the creation of digital twin assets of non-human entities such as those needed for virtual depiction of industries, virtual depiction of all real-world objects in indoor and outdoor scenarios.

Post creation of virtual spaces and virtual assets, then comes the most intricate complex step of creating naturalistic and imaginative virtual interactions between humans and objects, objects and objects, objects and virtual spaces, etc. This would involve human interactions such as hand-body-face gestures and expressions to signify all human interactions, object interactions related to physical / mechanical operations in the virtual world (lighting effects, physics effects, etc.) Though there are many challenges in creating the interactions, the advancements in deep learning and AI techniques have given hope of realising these in coming decade.

The Metaverse is incomplete without the existence of a virtual economy which suits the spaces and interactions imagined in the virtual world created as above. All transactions in the Metaverse need professionally designed and defined digital currencies for enabling virtual payments. Major challenges exist with respect to scalability in digital format, performing secure transactions with proper authentication robust to hacks, establishment of digital wallets for social media. Many non-fungible tokens (NFTs) have already been promoted and initiated as part of this pillar.

The industries world over have already started joining the band-wagon of Metaverse, with many of them working specifically on the above 4 pillars in variety of ways. The sheer volume and endless opportunities that exist in this space has already started overwhelming technologists and researchers alike. Sample Metaverses have already started emerging in limited form and are taking shape towards becoming standard entities going further. Over and above the 4 pillars mentioned, there are many other aspects to be looked into immediately such as standards (protocols / guidelines for uniformity), contents & services, enabling smart devices (hardware such as HMDs), cloud infra, network enablers, block chain technology etc.

Overall, Metaverse can be thought of a new wave, creating multitude of opportunities for each and every fraternity existing in today’s world to ride on, and transform today’s experiences infinitely towards becoming truly immersive Extended Reality (XR) experiences in many unimaginably differentiated rich virtual worlds providing a hitherto un-heard of and un-thought of dimension to human lives.