People should unlock their home door and office gate every day. Wouldn't it be much better if your Galaxy smartphone automatically unlocks and locks doors/gates by holding it? This convenience is coming soon from FiRa Consortium.

On October 27, 2021 FiRa Consortium announced the start of certification of the Fine Ranging UWB MAC and PHY subsystems in devices. This is a major milestone for FiRa; the entire focus of FiRa since its inception is to make available certification for these subsystems. 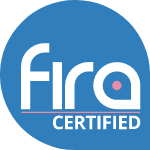 Certification in the telecommunication fields indicates that product is conformant with the specific technical standards and interoperable with other certified devices. In this sense, FiRa CERTIFIED logo now discloses that any FiRa CERTIFIED devices such as smartphones and doorlocks provide seamless user experience based on the fine ranging and locationing.

IEEE does not test implementations for conformance to their standards, so industry consortia have been founded to offer conformance and interoperability testing services. Wi-Fi Alliance is one such industry consortia; Bluetooth is another. In order to create a robust ecosystem for the new ranging and locationing technology, the developers of the IEEE 802.15.4z amendment knew that the industry was going to need a testing and certification service. The founders of FiRa, including Samsung, came together to create a home for developing and making available that testing and certification service.

Ultra-Wide Band is a set of RF technologies that use at least 500MHz of bandwidth to perform communication and locationing. Since over 500MHz of bandwidth is used, the amount of power at any particular frequency is very low, so that UWB radios tend to not interfere with existing narrow-band radios, and vice-versa. There are several types of UWB; the Fine Ranging UWB uses a series of positive and negative pulses to communicate. The arrival time of the pulses can be easily measured, which allows for precise timing of the pulses. 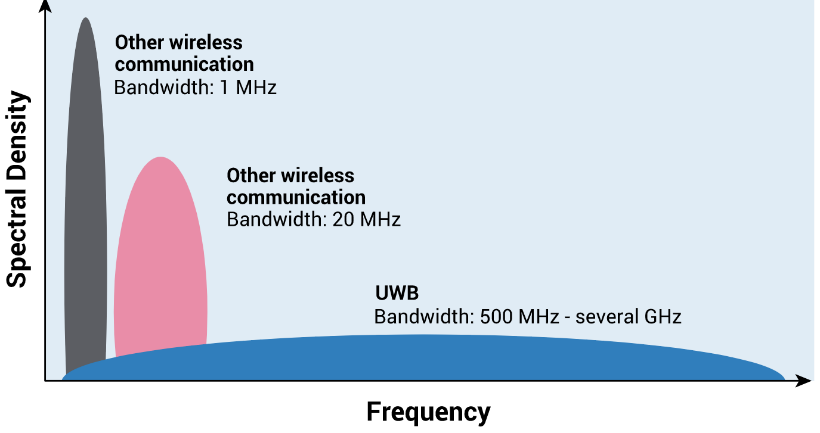 Radar is essentially the determination of the distance to an object by measuring the time it takes for an emitted pulse to travel out to the object, be passively reflected back and finally be detected back at the transmitter site. UWB ranging is similar to radar, but the object being detected is not passively reflecting a pulse but rather is receiving and timing a data packet from the initiating transmitter station. If the receiving station knows when the initiating transmitter station sent the packet, it can then calculate time of flight of the packet and therefor the distance between the initiating station and receiver. This is known as one way ranging. 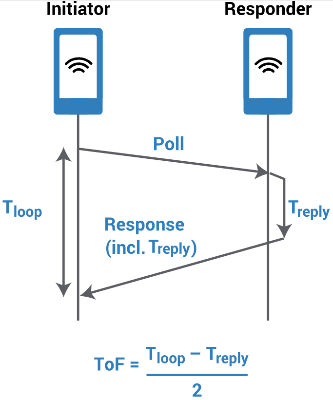 For even more precise results, the two sides switch roles, where the original initiating station becomes the new receiver and the original receiver becomes the new initiating station, and a measurement is taken. The resulting two measurements can be averaged to calculate a more precise distance. This is known as double-sided two-way ranging. The distance between devices can be measured down to an accuracy of about 1cm and over a distance of up to 100 meters.

If a device has multiple antennas that are physically separated from one another, the device can determine that a received packet was detected at the different antennas at slightly different times. This technique is known as Time Difference of Arrival (TDOA). If the device knows exactly where the antennas are in relation to each other, and the different times of arrival, the device can then use the information to calculate what direction the packet came from. The greater the number of antennas, the more precise the measurement of the direction. The direction, along with the distance, allows the determination of the locations of the devices relative to one another.

The test specifications were developed to test all the features of the MAC and PHY subsystems that implement the FiRa technology. FiRa developed a set of technical requirements documents specifying which features of the IEEE 802.15.4z amendment FiRa would use, along with which selected features were mandatory to implement and which selected features were optional. The test specifications consist of a set of test cases, each test case testing an aspect of the implementation. Each test case is a set of instructions on how to set up the device under test and the test equipment, and the expected outcome of the test. All mandatory features are tested, and if an optional feature is also implemented it must also be tested.

Test tools have been developed to automate the test cases. A test tool interface has been specified by FiRa, and all devices that undergo certification testing must support the interface. There are currently three types of test tools: PHY Conformance Test Tool, MAC Conformance Test Tool, and MAC/PHY Interoperability Test Tool, automating their respective Test Specification. Currently, FiRa features all the required Test Tools for FiRa Certification testing as below

FiRa does no certification testing itself, instead FiRa authorizes test labs to do the certification testing. To become an Authorized Test Lab, a candidate test lab must demonstrate that it knows how to correctly set up and run the test equipment, ad knows how to interpret the resulting test results. A candidate test lab must also show that it follows certain testing best practices correctly.

When certification was announced, four test labs were named as ATLs, three test tools were listed as verified, and three devices were listed as certified. The Samsung Galaxy S21 Ultra was one of the three initial certified devices, and the only device that was a complete product (the other two devices were NXP’s chipset evaluation boards).

If you are interested in exploring FiRa UWB locationing behavior, several Samsung Galaxy phones implement UWB, and the Samsung SmartTag Plus works with the UWB enabled phones to show locationing using the UWB positioning technology.