Networking across barriers for meaningful innovations

Over a decade of impactful contributions by Nayan Ostwal

It is not every day that you meet someone who has worked on hi-tech Mobile Network generations right after joining fresh from campus. The recent multi billion dollars deal of Samsung with Verizon is a testimony to Samsung R&D Bangalore’s (SRI-B) capabilities and Nayan Ostwal went down the memory lane on how he developed World’s first 5G product for Verizon. SRI-B Network’s journey with Verizon first began in 2017 where the requirement was to develop a CPE device with the capacity to support 1 Gbps. This was even before the 5G standards were released by 3GPP. The work opened the doors for greater collaboration with the world's largest mobile network operator (by revenue), as collaborations expanded into advanced 4G and 5G feature development later.

Today, our Networks R&D team takes pride for enriched contributions to all the product lines involved in the contract, with key 4G/5G modem features in Verizon's software package being developed out of SRI-B. Nayan plays a key role in Networks team and contributed to multiple flagship devices while working on 4G, 5G and 6G across teams in SRI-B and Suwon. 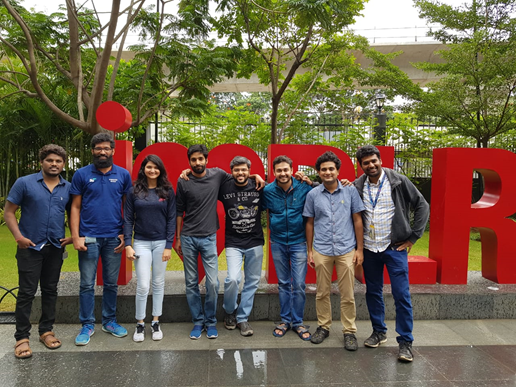 Since, then there has been no looking back. Soon after the discussion, he was given an opportunity to work on Networks and then CPE (Customer Premises Equipment) side where learning was humongous. In his previous assignment, Nayan focussed on commercialization part only as other teams were involved in design and development. The scenario completely changed at CPE as he had to do an end-end execution. Right from design to development of the highest throughput for 5G, he had to integrate all the aspects from scratch until commercialization. Now in the 6G team, he is more engrossed on the research side along with development.

Nayan adds, “My leaders gave me a lot of freedom which enabled me to take more ownership and responsibility. I remember, how for the first time, we worked on multi core design for a single user equipment and it required breakthrough innovations to make it happen. I learnt a lot by experimenting and work became fun as there was immense brainstorming to create more optimization in the new generation technologies”.

Nayan has multiple awards under his sleeve today and recently received two global A grade patents on 6G as well. His past experience with other teams helps him collaborate with multiple intra and inter teams while contributing to the futuristic technologies.

If you share similar interests and love taking up challenging projects, please visit: