[Blog] Paving the 5G road from concept to reality

Anyone who follows the latest development in the wireless industry sector should know about 5G. It is the culmination of years of innovations in wireless technology that allows blazing fast data transfer with ultra-high reliability and endless application possibilities. Some describe 5G as the cornerstone that will change the way we live and work in the near future.

Many people may have heard about the 5G buzz but not many people know the different technical expertise that went into making 5G a reality. One of such areas is the performance and RF testing of 5G networks and devices. For example, unknown to a typical consumer who has just bought a brand new Samsung S20 5G phone are the thousands of tests that this phone had to pass in order to be certified as a 5G phone. This particular area of 5G expertise falls under the mission of 3GPP (3rd Generation Partnership Project) TSG (Technical Specification Group) Working Group 4 (RAN4 for short).

3GPP is the de facto standardization organization that develops technical specifications for 3G, 4G, and 5G wireless technology that encompass multiple layers of a communication system such as physical layer, medium access control layer, layer-3, service, and application. Among these are a set of specifications developed by RAN4 that details the requirements on radio frequency, radio resource management, demodulation performance, and conformance testing. These requirements provide the foundation on which numerous regional bodies build their certification processes so that phones such as the Samsung S20 5G can be certified as a 5G phone.

RAN4 has been at the center of my life since I started my career as a standardization engineer in Samsung back in 2007. Over a course of more than 10 years, I had the pleasure of working with some of the best engineers of our time; first as a fellow delegate and later as the chair. We had come from different regions and backgrounds but we were all working towards a common goal to make 5G a reality. This article is an introduction on how RAN4 made 5G a reality told from my perspective as the RAN4 chair who lead the global effort to complete this monumental task. 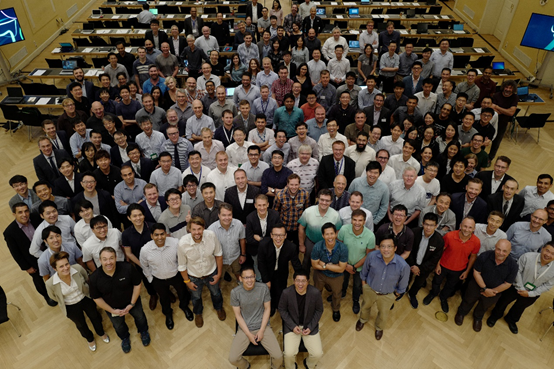 After a busy RAN4 meeting in Ljublijana (August, 2019). The standardization engineers who made 5G a reality.

Defining the test requirements for 5G involves participation from all over the wireless industry that includes regulatory bodies, mobile network operators, terminal/network/component vendors, and test equipment providers. Although they are all working on the same thing, different companies often have very diverging views on how the test requirements is specified. For example, operators tend to argue for requirements that are more stringent so that what their networks have better performance while vendors tend to argue for the opposite in consideration of implementation complexity.

On any given day of a RAN4 meeting, there are heated debates between different companies over a diverse range of issues. One of my key role as the RAN4 chair is to achieve consensus among the different parties in such situations to move things forward. After my four-year term as the chair, many delegates asked me how I resolved contentious situations that looked hopeless. Until this day, I do not have a good answer except that I tried to understand the technical proposals, listened to the arguments from both sides with patience, and did my best to recommend a balanced way forward. Of course, things did not work out always as planned and delegates would be upset one way or another. Although not perfect, in the long run, this way of chairing built trust and mutual understanding among the companies.

One key area of 5G that RAN4 spent a significant time and effort on is the development of test requirements for the millimeter wave (mmWave) spectrum. Utilization of mmWave spectrum (e.g. 28 GHz and 39 GHz) for cellular applications was one of the key breakthroughs of 5G. By utilizing the abundant frequency resources in this spectrum, 5G can support data rates which are several gigabits per second. Such data rates would be important for 5G applications such as fixed wireless access and immersive experience devices.

While the support of mmWave spectrum sounds attractive, it presented RAN4 with a real life problem: development of antenna and RF test requirements for a spectrum that RAN4 had never worked on. For previous generations, it was possible to test the RF performance of mobile phones simply by disconnecting antennas from the rest of the terminal hardware. This method is referred to as conductive testing in RAN4 and was widely used before 5G arrived. With mmWave, it is no longer possible to use conductive testing since the antenna and RF front-end are integrated into a single hardware to minimize internal loss within the transceiver chain.

Since conductive testing was no longer a viable solution for mmWave, RAN4 decided to rely on Over-the-Air (OTA) testing for specifying the antenna and RF requirements. Since OTA testing is done measuring the actual RF signal in the air, it needs to take into account not only the device that is being tested but also the testing environment such as probe antenna, test chamber, and phantom structure. The first OTA requirements for 4G took almost a decade to complete in 3GPP. For 5G, RAN4 was tasked to do the same job for a spectrum that they had not worked on before within a period of 18 months. Thanks to the immense effort from everyone in RAN4 and the compromises that companies made in order to keep things moving forward, the task was completed in time.

Today, 5G is being commercialized on a global scale. The speed with which the operators are turning on their 5G networks is much faster than what it was for 4G. Every time an operator turns on their 5G network, they are deploying over frequency bands that RAN4 defined using network and terminals that met the requirements set forth by RAN4. The work of RAN4 is not done yet. RAN4 continues its work on the evolution of 5G. As the former RAN4 chair, I would like to thank all my fellow colleagues in RAN4 for all that we have achieved and their continuing efforts.