Tizen 10 Years: Now and the Future

Tizen debuted with its release of version 1.0 on April 30, 2012. We would like to find out what trajectory the 10-year-old platform has taken, how it has grown, and what it is pursuing in the future.

Established in 2012 with the joint participation of Intel and Samsung, Tizen is a Linux-based open-source device software platform run by the Linux Foundation.

In addition to Linux, over 800 primary open sources such as Chromium, GStreamer, and .NET continue to introduce the latest versions of this platform. Self-developed codes have been added as open sources to more than 1,000 (unit: Git Repository) at 15 technology domains1 , including system, user interface (UI) framework, application framework, and machine learning, and are being updated steadily. 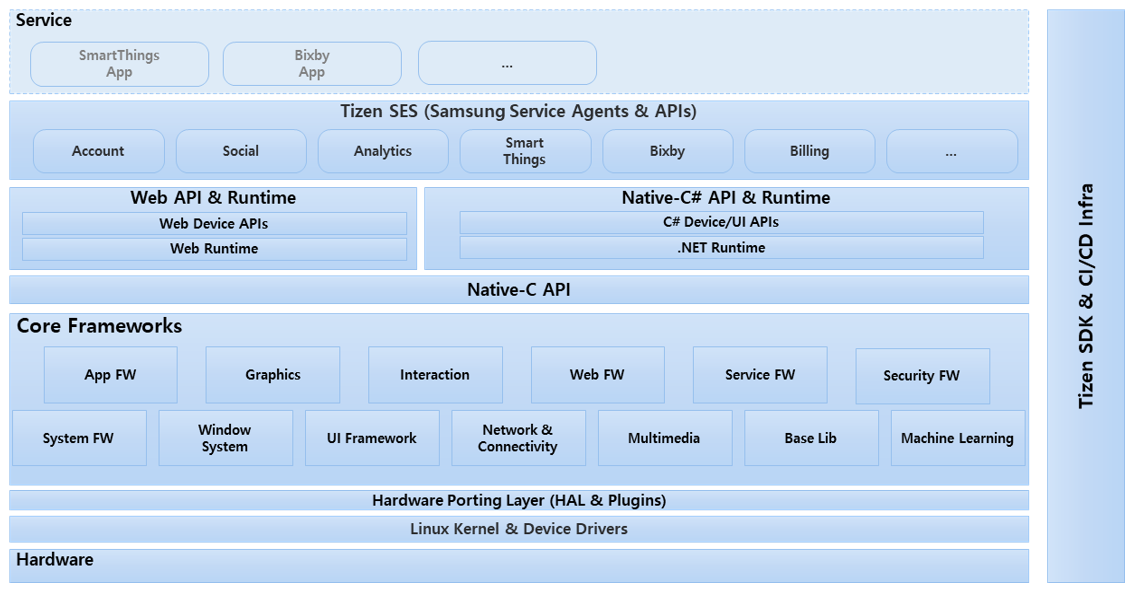 Native (C/C++) and C# were added, starting with HTML5 app (web) support as an app development environment, and Xamarin and Flutter were also made possible to support cross-platform apps.

In version 1.0, the mobile platform was distributed first, and the platform for various devices, such as smart TVs, In-Vehicle Infotainment(IVI)s, and tablets, has been aimed, so mobile, TV, Internet of Things (IoT), and wearable profiles have been managed.

The first commercial Tizen product was the digital camera NX300 in 2013, but in terms of Tizen Compliance, it is Gear 2, a Samsung smartwatch.

Since then, it had been applied to the entire Samsung smartwatch product line. Gear Fit, its lightweight version, was also launched, and it changed its brand name to Galaxy Watch and was commercialized up to Galaxy Watch 3 based on the wearable profile.

In 2015, Tizen Smart TV, which was first applied to TV, was born. So far, Samsung Tizen TV, based on the newly updated Tizen version, has been released yearly, and the product lineup has also been expanded not only to big to midsize screen devices such as Smart Signages, Flips, and Smart Monitors but also to audio-based devices such as Soundbars and Smart Speakers.

Tizen’s successful application of TVs has also led to its foray into home appliances. The Family Hub 1.0 with a 21.5″ screen attached to the front was released under Tizen (2016), serving as the platform for its new products that have been versioned up yearly since then. Furthermore, air conditioners, washing machines, robot vacuum cleaners, and smart ovens equipped with Tizen were introduced to the market in 2015 and 2016 and have been continuously released.

Meanwhile, it also entered the mobile device market with four Z series launches from 2015 to 2017 for low-end smartphones in the Indian market, but they were later discontinued.

At the end of 2021, there were about 330 million devices equipped with Tizen worldwide.

What is the driving force behind the commercialization of more than 300 million products applied to various product lines over the past decade?

After initial commercialization was made for each profile respectively based on TV, wearable, and mobile profiles, the fragmentation of the entire platform occurred. To minimize this, each profile has been reorganized to consist of Tizen Common, typically used by all Tizen devices, and specialized modules necessary for a profile (Version 3.0). 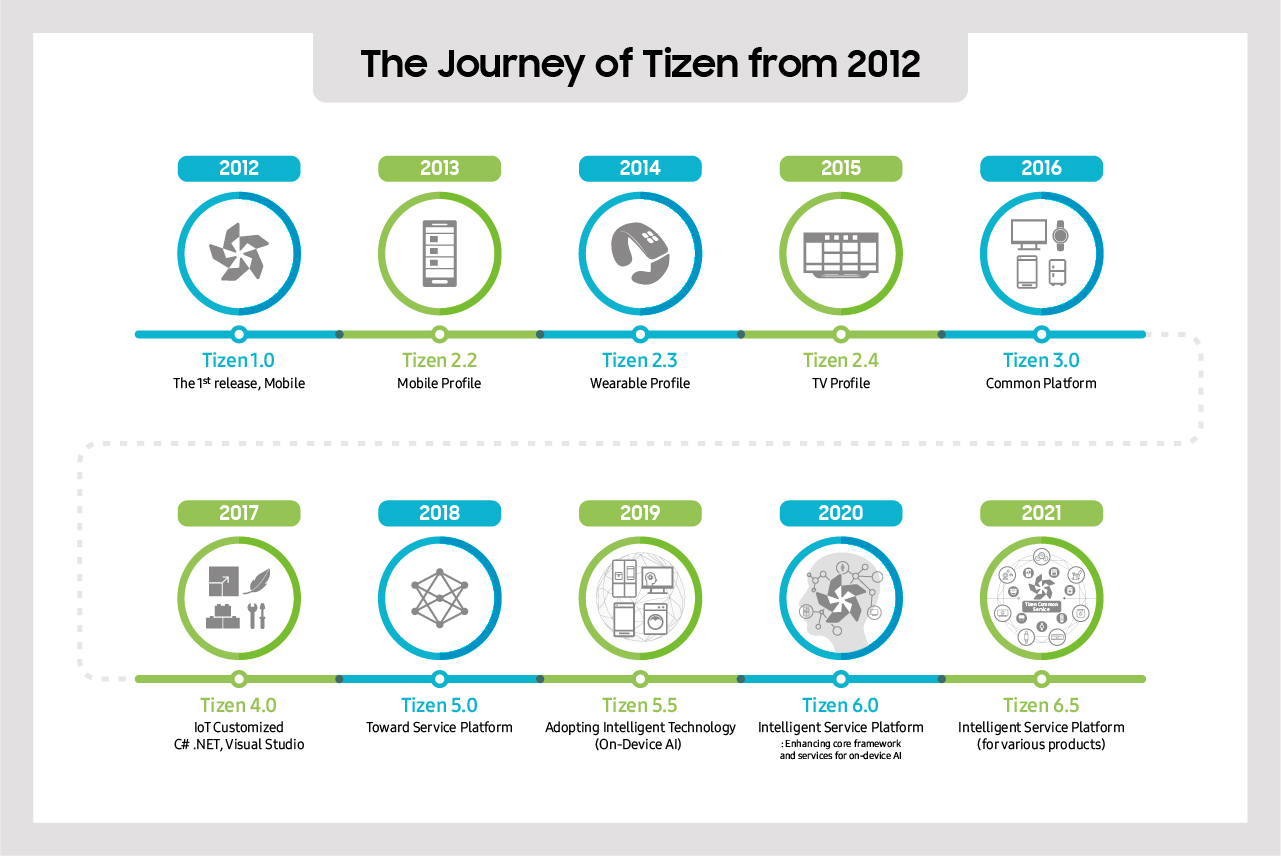 To respond to the diversity of IoT devices (in the case of existing profiles unmatched, new form factors, or devices that will appear in the future) and allow them to be applied to all low- and high-end products within a profile efficiently, Tizen had to be restructured into a flexible and configurable architecture. If you need a new device platform that is not suitable for the existing profile, you can secure the device’s platform by combining, selecting, and constructing the building blocks required for the device’s feature (Version 4.0).

In preparation for the growing importance of services on devices, the expansion to service platforms was promoted after version 5.0, allowing as many services such as SmartThings and Samsung Cloud to be installed as possible.

In addition, to advance the era of intelligent devices and evolve into artificial intelligence (AI)–optimized platforms, AI core technologies are continuously integrated into the platform, and various AI-based frameworks using AI technologies are added. It can refer to machine learning application programming interfaces (APIs), voice recognition engines, a multi-assistant framework, NNStreamer2 , and NNRuntime3 (Versions 5.0 and 5.5).

The provision of new user experiences also continued. Application off-loading service frameworks, UI off-loading service frameworks, and AI interference off-loading aimed at multi-device experiences are implemented so that more devices can be connected to enable intelligent services between them. Besides, powerful animation effects and responsive UI functions can be conveniently used through the Natural User Interface (NUI), which can build rich applications on low-end IoT devices (Versions 6.0 and 6.5).

The Latest Tizen 7.0, and the Future

The main progress of Tizen 7.0, which will be completed at the end of this year, includes work considering new Tizen devices and strengthening intelligent functions and services. Platform core technologies needed to support Metaverse devices and robots are being prepared for the future. They include 3D rendering engine enhancement, OpenXR runtime, MediaVision 3D extension, real-time enabled kernel, on-device learning-based face recognition, and vision recognition enhancement.

It also covers upgrading major open sources such as GStreamer, PulseAudio, and .NET and strengthening product competitiveness, such as the light multiuser system.

For the future era of hyper-connectivity and intelligence, it aims to become a device and service platform that leads users’ needs and market expectations by offering natural interfaces based on multimodal interaction, the utilization of ultrarealistic content, consistent service experience based on fast and convenient connectivity, and the intelligence of all home devices. 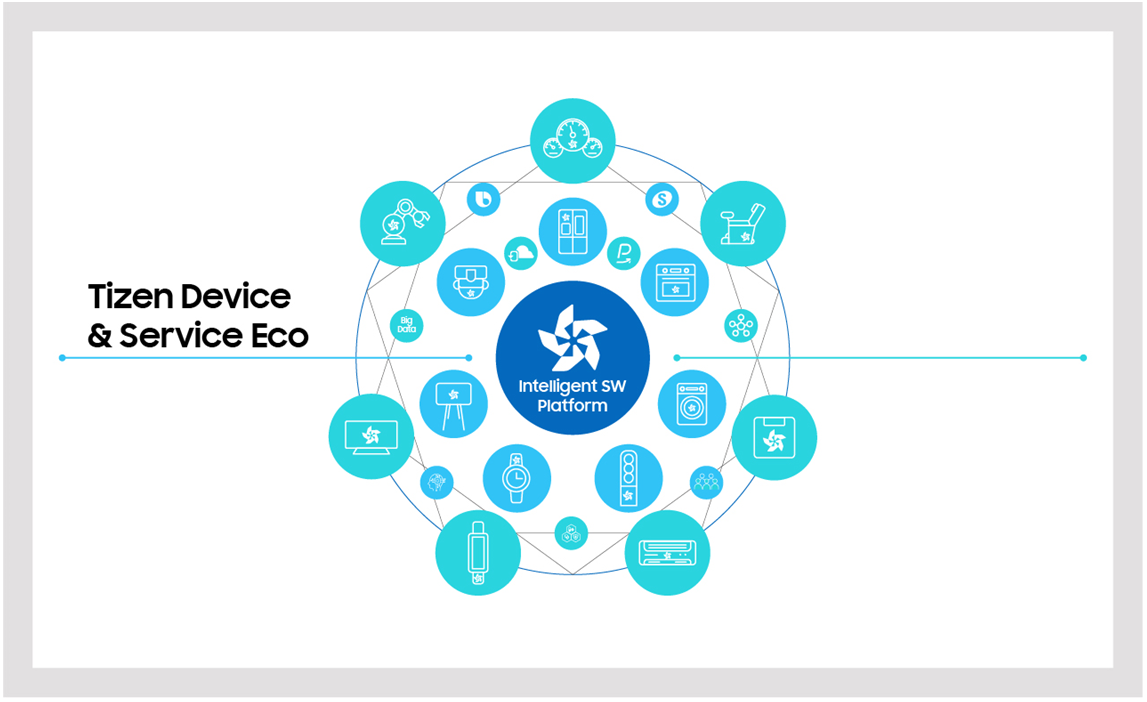 Figure 4.  The Future of Tizen

Just as Tizen has evolved steadily over the past decade, it will continue to change and innovate, maintaining its position as the best software platform, including consumer electronics and IoT devices as well as new devices, in the future.