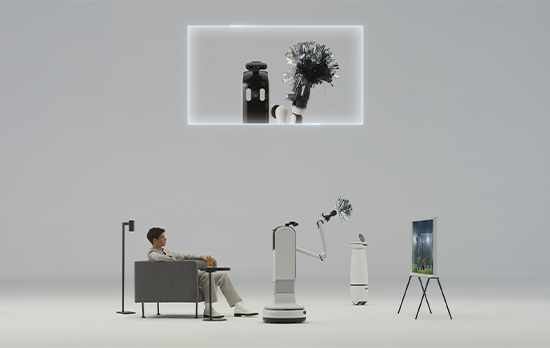 To address this opportunity, Samsung Research has set its goal to secure cutting-edge SW and HW technologies for intelligent machines, delivering rich AI experiences to customers. Currently, we are focusing on robot, AR glass, and so on. It is our promise to the world that we at Samsung Research will never stop challenging ourselves to push the intelligent machine technology boundary to the next level. 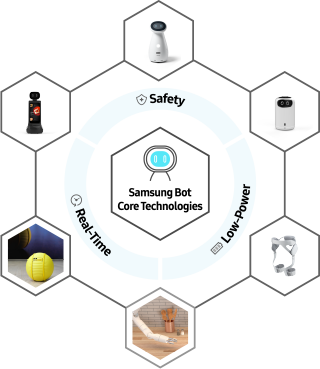 ‘Samsung Bot’ is one of Samsung’s next-generation AI projects.

Our goal is to push ourselves to innovate to make a positive impact on the world, and we believe that the users of our robots will be able to take advantage of their various AI technologies, giving them special care as if someone was close by all the time. For this purpose, we are developing two categories of ‘Samsung Bot’, home care robot and “functional” social robot.

Home care robots refer to service robots that can lessen household chores and could be considered as an expansion of home appliance products that leverage AI technology. It includes ‘Bot Air’, an air-purifying robot, and the ‘Bot Clean’, a vacuum cleaning robot that we introduced at CES and KBIS this year.

On the other hand, social robots refer to those that can help care for the elderly or children, communicate/interact with people, or be like a companion animal. In particular, we are trying to develop social robots that can do valuable functions that meet societal trends, and one of the outputs is ‘Bot Care’, which we also introduced in CES 2019.

We are developing and securing all the key technologies for building robots, from SW—such as OS, middleware, and AI—to HW—such as sensors, motors, systems, manipulation, and locomotion. We are integrating them with a common robot platform as well as trying to implement various ideas, form factors, and possible killer use cases based on the platform.

We will keep advancing those technologies to the commercialization level to serve real benefits to customers by releasing our Samsung Bots soon. 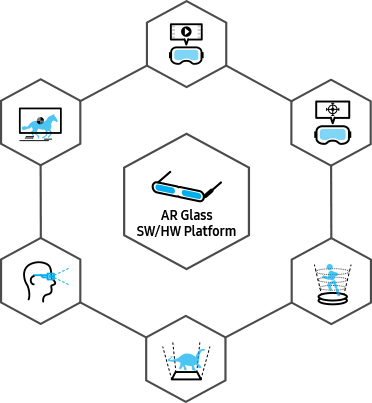 AR technologies are gaining attention as one of the new growth engines in the future. In particular, AR Glass is expected by many experts as a next-generation IT device because it has the advantages of large-screen immersiveness compared to smartphones, unfettered freedom of not having to hold it, immediacy of not having to take it out of pocket, and a truly private display.

Given the limits, Samsung Research aims to secure core AR technologies that are necessary to realize an ultra-thin/small AR glass for daily use without spatiotemporal limits and with promising AR services for the future.

To this end, Samsung Research focuses on obtaining core HW technologies that can provide usability and convenience while maintaining the form factor of the regular glasses, such as ultra-thin/wide lens optics, ultra-small/high-resolution display engines, and autofocus technology to relieve dizziness. Furthermore, we are developing AR SW technologies that are needed to provide an immersive AR experience through real-virtual seamless mixing and to realize promising AR scenariosfor the future.